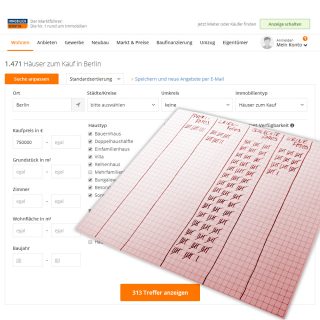 Finally new figures. Already one year ago I did an analysis on how well prospective buyers can inform themselves visually about properties on the internet. But the result was devastating: Barely 10 per cent of the offers contained acceptable real estate photographs. 320 ads on Germany’s leading real estate sales portal Immobilienscout24 where used for this analysis, limited to my home market Berlin at a purchase price of EUR 750,000+, rental appartment houses excluded. Certainly, in this high-end segment I had expected significantly better results.

Now, exactly 12 months later, I investigated this market again. There were 313 properties on offer in this range – ie virtually unchanged in comparison to the year before. The most expansive property was offered for almost EUR 13 million. The following development was observed:

Professional real estate photos can be recognized even by any layman. They seem to shine. This is because they

Property images taken with some effort show a clear tendency towards the aforementioned quality, yet they lack at least one of the features listed above. This is mostly due to not yet optimal equipment, missing experience on the photographer’s side and sometimes the lack of fine-tuning in the postprocessing of the image.

Offers without (usable) shots also include those objects that show only a logo of the sales organisation. Other offers in this category often show one to four sample photos or renderings that have little to do with the offered object. Some presentations don’t show any images to protect the privacy of the yet-owners. They also fall into this hole.

Here is the graphical comparison of the two analyzes: 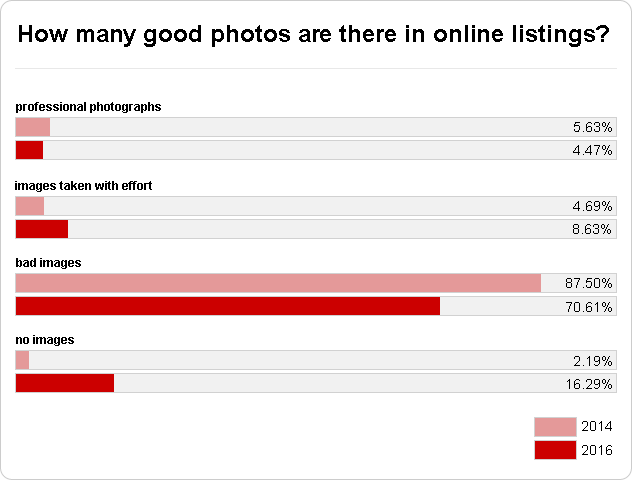 Trends and Insights of this Analysis

It was particularly obvious that many of the ambitious photographers had done their homework and grabbed some basic knowledge for real estate photography.

Not really bad, but …

However, it is not enough just to align the camera, flip the HDR-switch on the device and play with the controls in a free image editing program like Google Picasa. These real estate professionals are on the right track, but need an exact workflow, enabling them to quickly create impressive shots. How to do this is described at the end of the article. 😉

For properties with bad shots or without adequate images in particular the branches of some large-scale real estate sales organisations stood out. In this case, a consistent training of employees or franchisees could be organized efficiently. In the rare case one of these providers had chosen better images their offer quite often was visually devalued by some additional self-snapped images of the environment. Among others garden bushes, ducks, cats and wheatered landing piers where found.  Thus the interested party was rather bored, instead  of being courted.

Speaking of landing piers. Berlin has many waterfront properties. Many many. But brokers appear to love going crazy with this information . In many of their property descriptions could be found as many shore and water views – btw in all weather conditions – as there were photographs of house and garden. This had quite a disturbing effect to the viewer.

And there was a constantly admired phenomenon: The collage. Someone had obviously heard the magic number of 10 to 20 images per property description, and felt sad to sort out the many beautiful snapshots among the 183 photographs on the memory card. It seemed to be an ideal solution to mount multiple photos side by side and one above the other and send them as a single photo on the on-line portal. Crux of the matter: Since several shots now had to share the space of a single real estate photo, all images were correspondingly smaller. Who needed to decrypt these collages, lost any joy in property search.

And finally there were friends who overdid their image postprocessing.

There seemed to be a persistent conviction that a frame belongs to an image. Amazing, by what creations valuable screen space was wasted here.

The number of usable shots (professional and effort-driven) has increased by nearly 3 percent compared to two years ago. These providers have realized that their property photos primarily serve advertising purposes- especially in the real estate sector I examined for this post.

Now poor images were published less often – but it became more common to go without usable photos at all.

The number and range of shortcomings remained unchanged. A reason for this stagnation may be ad campaigns that promise us that we can tackle any stage of our lives with a smartphone – even photography. This may be true for holidays, children, pets and party. But it is definitely not for the special conditions for real estate photos (light, space, instability).

For anyone who is serious and wants to catch up to the top, there are only two options: hire a professional or go to school. At PrimePhoto’s you’ll find both.