Just in time with this year’s Photokina Nikon has announced its new camera D750. Finally this gear combines features real estate photographers have been waiting for. What are the camera’s advantages for architectural photography?

We have examined the main new features of the Nikon D750

which are important for our photography genre and have commented the results in this article. 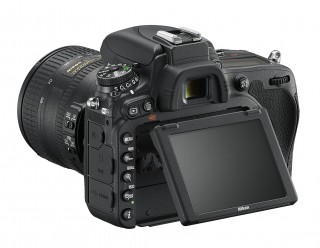 Photographs of real estate and architecture are very often taken from unusual vantage points. In most cases using a camera from eye level is not an option. For interior a lower position is mostly the right way, while for exterior there is an (sometimes significantly) elevated level the right position to shoot from to get a more natural impression. In both cases it is hard to control the image either through the view finder or a fixed back screen.

The large and high resolution LCD screen of the Nikon D750 can be flipped up or down. This makes it much easier to set up the camera from a normal working position. The D750 is the first camera in this category with such comfortable feature.

To examine a photograph at the camera monitor in terms of exposure, contrast and sharpness right after it was taken has always been a lucky game. Only at a 100 per cent enlargement on a computer screen any flaws could be clearly made obvious. Professional photographers transfer their images directly to a computer. Therefore the camera is tethered to the machine where there is running a software either from the camera manufacturer, Adobe Lightroom or Capture One to show the result on a bigger screen right after the exposure. Thus the photographer has the opportunity to take action and correct any mistakes instantly. Very often this tight camera-computer-combination reduces portability espacially in close spaces or even outside. To establish a wireless connection until now was only possible with sometimes expansive extra gear either directly delivered by Nikon or as a half tethered version with a mini router.

The Nikon D750 has a built-in WiFi module to send image data and receive commands. Display gadgets at the moment are mobile tablets and smart phones. Thus the cable, a heavy laptop computer and all the hassle with it can be dropped. Photos can be displayed right after the shot was taken and be enlarged for judgement by a finger’s press or swipe. Even the control of the camera is possible via this connection. The only flaw at the moment is Nikon’s own software because it may lack some functionality. But there are third party apps that are highly appreciated within the photo community. As soon as the developers have adopted the interface for the D750 photographers will have an absolutely comfortable tool at their hands.

Real estate images very often consist of large differences between very light and very dark parts within the same frame. Thus a single photograph has to capture bright daylight streaming in through windows and dark shades of interior items at the same time. Smart phones and simple compact cameras are limited in this matter, they either show light areas as white spots without details or darker parts as nearly black areas without noticable details. Rescuing these flaws in post production is always a pain.

One possible alternative would be the extra effort of making so called HDR images, where light and dark parts are shot separately and combined on the computer later.

The full frame sensor of the Nikon D750 cares for high dynamics by nature – it can capture a broad range from very light to very dark parts within one image preserving lots of details. In addition to that image noise which mainly occurs at higher sensitivity settings for the sensor is rather low. A reason for this is that single pixels have more space on a large sensor and thus they do not interfere with each other thermically and electrically. And again: For the first time in this camera category the D750 has built-in Nikon’s excellent signal processor EXPEED-4 which until now can only be found in much more expansive professional camera models.

In addition to this the Nikon D750 has other great features. These are not that important for architectureal photography, but it doesn’t hurt to have them on board, like:

Right after the presentation of the Nikon D750 the first disappointed individuals startet bashing against Nikon’s new baby. Because of the nomenclature they had expected with a D750 would appear a successor for the legendary semi-professional camera D700 which was launched six years ago. For real estate photographers the major reasons named by these faultfinders are neglectable:

Swallowing one bitter pill (or more)

Those who buy a Nikon D750 for more than 2.000 EUR for real estate photography may have to be willing to invest more, depending on what equipment they have shot with before. These investments may include:

As soon as we hold this camera in our hands we will backcheck all the benchmarks named in this article.