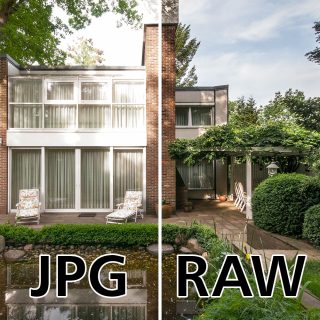 Real estate photos are very often taken under poor shooting conditions: low light, high contrasts and small space to shoot. Image quality suffers under these circumstances. A good help can be the use of the so-called RAW format. This is a special file format provided by many modern cameras. However, it is not available in automatic photo mode.

RAW files have great advantages you have to handle difficult lighting conditions in real estate photos. In particular, with RAW the photographer can deal with high contrasts with comparatively dark interiors and the shining light outside behind windows.

Or: In the present example, details in the cloud structure or the tree details in front of the bright sky as well as the depth in the image can be brought back with the RAW format. A RAW file often contains more image information than can be seen at first glance. This makes it a real alternative to the usual JPG file format.

Advantages and disadvantages of photographing in JPG format 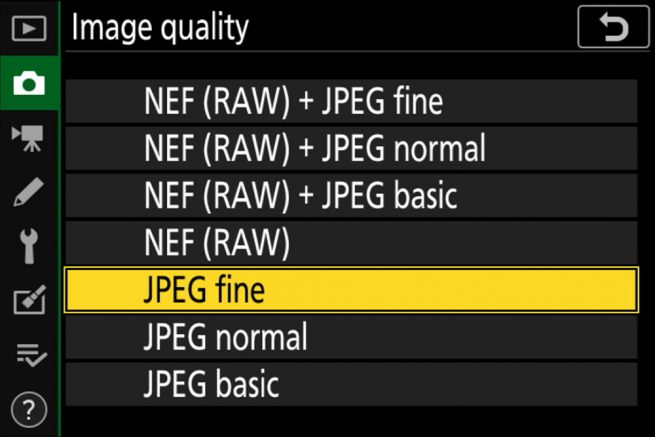 First a short answer to the question: Is it JPG or JPEG? The file format was defined as a graphics standard by the Joint Photographic Experts Group. The abbreviation was therefore JPEG. Now there are different sub-formats for specific applications (e.g. JPG, JPEG, JPE or JFIF). Also, Windows operating systems only allowed three-letter file extensions. Thus JPG was used. So we create JPEG files with the extension JPG.

The advantage of the JPG format is that the image is immediately available after it has been taken. It can be viewed instantly on a variety of screens and computer systems. It is displayed almost identically on a smartphone as well as on a laptop or office computer. At the same time, the algorithm reduces the file size by not storing supposedly unimportant image details in the image file.

This advantage is also a disadvantage for real estate photography. After all, we want to show as many details of a real estate object as possible. 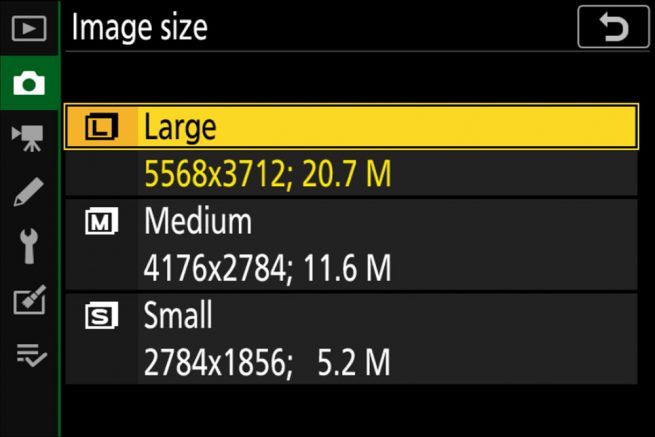 You should always choose the largest possible image size in JPG format in order to capture many details.

But the manipulation of image information  goes even further. Depending on which algorithm the camera uses to produce the JPG files, well-intentioned changes in contrast, color and sharpness occur without being asked. The camera then saves these manipulations permanently in the image file. They can only be edited to a limited extent. Good cameras have so-called image profiles in which the strength of this automatic image processing can be adjusted. But since we always have very different scenes in front of the lens, for which different values ​​come into question, their use proves to be inefficient – especially if you don’t permanently want to dive deep into camera menus.

The dilemma becomes particularly clear when there are strong contrasts in the image. A camera sensor can process about half as many levels of brightness in one image compared to the human vision. So in many real estate photos, the exterior areas are overexposed or the interior is underexposed, although we perceived it very differently when we took the picture. A camera sensor usually has some reserves that can be revealed later with the appropriate image processing. However, if this reserve had already been restricted by the JPG algorithm, nothing can be saved even with retouching.

Advantages and one disadvantage of RAW format 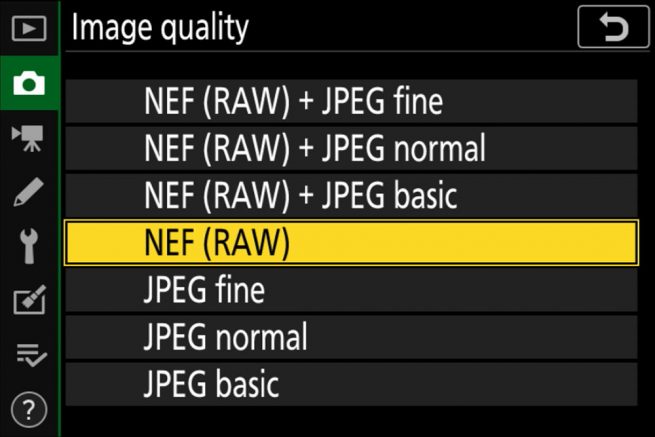 Here, too, first a brief explanation of the file designation: There is not just one RAW format. Each camera manufacturer uses its own format, and even each manufacturer’s camera model has its individual RAW format, which is not necessarily compatible with their sister models. That’s why RAW files have such different file extensions (Nikon – NEF, Canon – CRW/CR2, Panasonic – RAW, Sony – ARW, Fujifilm – RAF, Adobe – DNG).

When recording in RAW format, the camera saves the entire image information almost unprocessed from the sensor to the image file. The maximum possible leeway for manipulation is retained, so that even difficult lighting situations can be handeled easier. The downside is that smartphones or computers cannot display the RAW files by themselves. But this disadvantage becomes an advantage if you edit the images with the right software. Then all possible reserves can be activated. Only at the end I create a high-quality JPG version that does not contain the image manipulations of the camera, but exactly my optimized settings.

RAW format initially not always as brilliant as the image preview 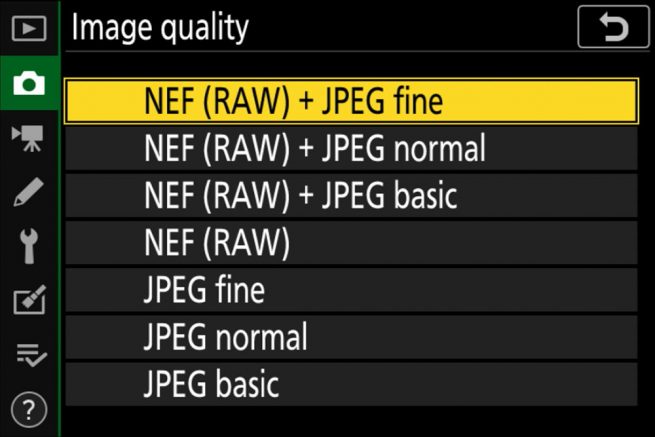 RAW and JPG file recorded at the same time – Many choose to use the JPG format for convenience.

Beginners are often disappointed that their RAW images look rather dull and lacking contrast on the computer. The images on the camera display had looked quite brilliant. This is because each RAW file also contains a small version of the image in JPG format to display on the camera screen. However, this JPG file is often manipulated automatically in exactly the same way as described at the beginning. Incidentally, it can help here to select an image profile such as „Normal“ or „Standard“.

The point that RAW files are terribly large doesn’t work here. First, storage space is so cheap these days that it shouldn’t be a concern. Secondly, once the RAW file has been perfectly edited, any number of target files in JPG format can be produced – in different sizes and resolutions for the purpose intended in each case. In this way, professionals produce files that look identical for the Internet or large-format printing, but which may differ fundamentally in terms of size and processing properties.

Many cameras offer the option of saving both formats with one release. However, I don’t advise this for real estate photography. Because in most cases, comfort wins and instead of the RAW format, the camera-manipulated JPG is used immediately. All promises „I’ll make brilliant pictures out of the RAW file later“ usually fall victim to the usual time pressure.

Conclusion: RAW is the key 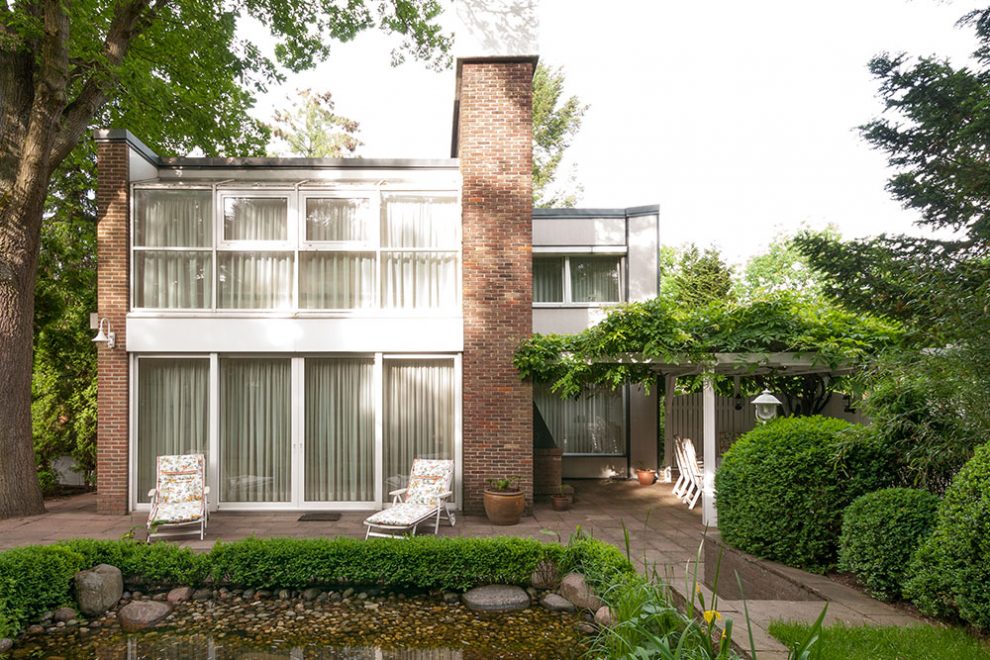 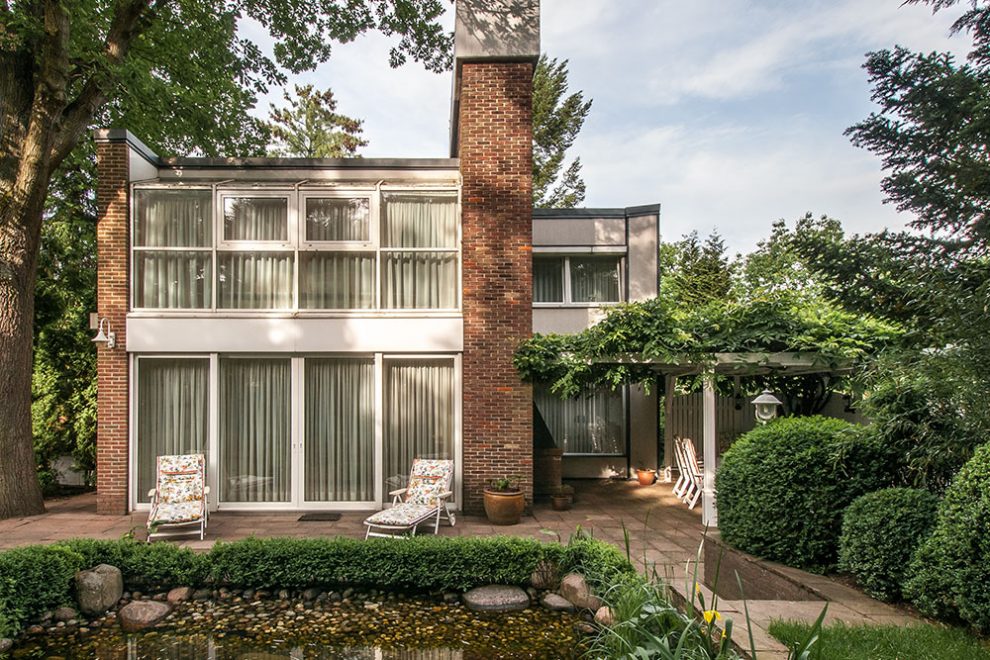 JPG file on the left, RAW format on the right – In the extreme areas, many details could be saved later in the RAW file.
The foliage of the trees is visible with sky in the background, the cloud structure has been brought back and the image generally has more depth.

Even if you have to take a small detour when using RAW format, efficient processing of the images can be achieved with the right workflow. In particular, the saving of important image details is the decisive advantage.

Speaking of efficiency: In my workshops on image processing for real estate photos, the participants – even those with average computer skills – at the end of this day’s event succeed in taking strong real estate photos in under two minutes per image. Most students bring their old JPGs and end up wishing they had shot in RAW before …