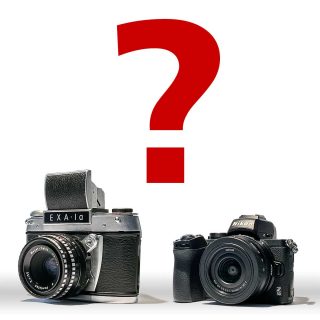 In the last four years, the camera market has been shaken up tremendously. Since the two major camera brands Nikon and Canon were able to catch up with the pioneer in this product segment, Sony, with their mirrorless cameras in 2018, there has often been a great deal of confusion: Is it better to buy SLR or mirrorless system cameras?

Why are SLR cameras so successful?

When the camera company Ihagee from Dresden, Germany presented the world’s first 35mm SLR camera at the Leipzig Trade Fair in 1936 with the „Kine-Exakta“ camera model and then produced it in series, a new camera class was born. For the first time, this camera combined many features that in particular mobile photographers appreciate to this day.

Some of them were also decisive in real estate photography and are still relevant today when it comes to the purchase decision:

What is special about the SLR camera? 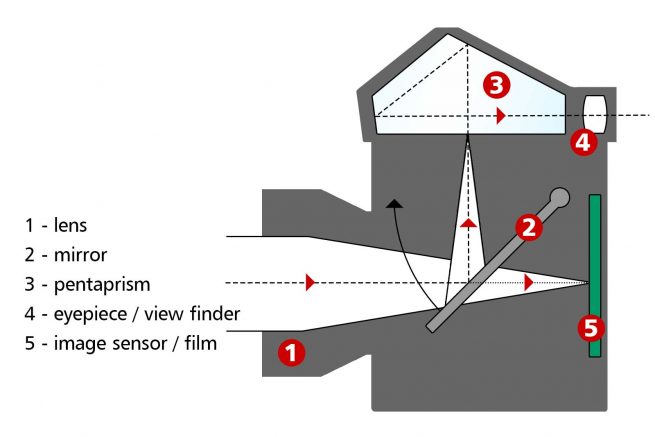 Simplified functional diagram of a single-lens reflex camera: The lens (1) bundles the light into the camera. The mirror (2) redirects the light beams upwards. In the pentaprism (3), the image is side-corrected and redirected again so that the scene can be assessed live and true to format via the eyepiece (4). As soon as the camera is triggered, the mirror (2) swings up and clears the light path to the camera sensor (5).

Older cameras and also very inexpensive analog cameras up to the 2000s usually had two lenses: one for taking images and one for the viewfinder. The latter were arranged offset above and to the side, so that when taking photographs one always had to guess which part of the image ended up on the film.

As the name single-lens reflex camera (SLR) suggests, there is a mirror in this camera. This reflects the image in the camera upwards. This makes it possible to observe the exact live scene when taking photos through the viewfinder built in above the film or sensor. Which affects both: the exact image section and the focal length used.

When you press the shutter button, the mirror swings up and allows the light to reach the film or sensor. After the picture has been taken, the mirror folds back into its original position and the live image can be seen again.

From 2003, mass-market digital SLR cameras (DSLR) from Canon and Nikon came onto the market for the first time. For the most part, they functioned like their analog siblings that had been developed up to that point, except that instead of the film, there was now a light-sensitive sensor that processed the light electrically. The basic principle is still the same today, only the output is now in modern electronic form.

What do mirrorless system cameras do differently? 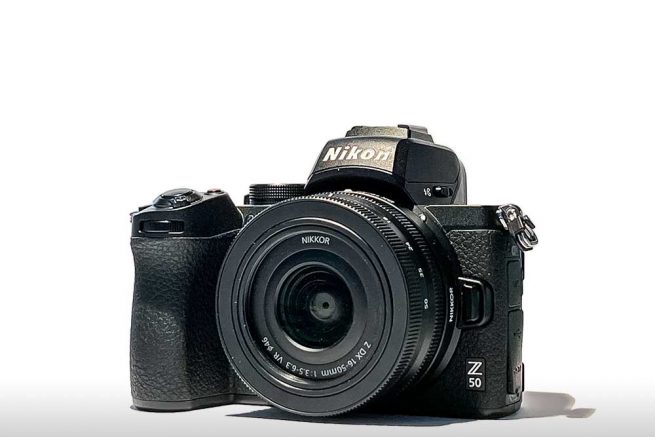 It was only a matter of time before the precision mechanics in single-lens reflex cameras were replaced by electronic components. In modern models, the camera sensor takes the place of the mirror. This transmits its live image to the rear camera monitor. Or to a small monitor that is used over the classic viewfinder.

Due to the elimination of the purely optical image transmission to the viewfinder, mirrorless system cameras (DSLM – Digital Single Lens Mirrorless) could be designed to be more compact and lighter.

The two technology latecomers Nikon and Canon also took the opportunity to introduce new and more powerful lens series. The lenses moved closer to the camera sensor. In addition, stronger optics can now be developed with a larger bayonet. These ensure better image quality right up to the edges of the image and into the corners.

Don’t worry, if you own older powerful and expensive lenses of the respective brand, you can continue to use them seamlessly via available adapters. But to be honest, if you haven’t worked with a professional lens in the past (Nikon with a golden ring and Canon with a red ring), you should also think about buying a new lens when switching to the new camera class. The comparison of the image results with old amateur lenses on the adapter is mostly striking.

Whether you choose a single-lens reflex or a mirrorless system camera depends on various requirements. There are basically four scenarios:

I have summarized the appropriate equipment for all four scenarios in my recommendations for basic equipment for real estate photography. The set I currently prefer is highlighted in color in this compilation.